Getting the Most Out of the Cryogen

The success of the CRYOLINE® UPT ultra performance tunnel comes from the way the experts at Linde have perfected the delivery of both the cryogenic liquid and vapor circulation. This new approach gets much more cooling power from the same amount of cryogen used in existing systems. The ultra performance tunnel has improved distribution control of the liquid cryogen that directly contacts the product. The difference is that the cold vapor circulation is extracting additional cooling potential that would otherwise be underutilized. Add to that the new vapor lock systems at both the conveyor entrance and exit to control cryogenic vapor and minimize air and moisture infiltration into the system. Improving cryogen conservation, boosting productivity and increasing yield improves your profitability.

The CRYOLINE® UPT ultra performance tunnel freezer takes the power of cryogenics to a whole new level. The freezing system was created to address customer needs to increase product throughput and boost productivity in the same or smaller footprint of existing cryogenic operations. Contact Us for more information about the possibilities. The ultra performance freezer, as with all cryogenic systems from Linde, is easily integrated into existing production line configurations. 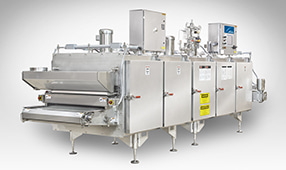